Each ten cent series 472 military payment certificate should have a serial number that begins and ends with the letter C. C is the third letter in the alphabet and series 472 notes were the third in the MPC series. This lettering convention continued up to J. Of course series 472 10 cent notes are very common. The design is unimaginative as well. The front of each note has text that reads “for use only in united states military establishments by united states authorized personnel in accordance with applicable rules and regulations.” The same text is also on the back of each note. 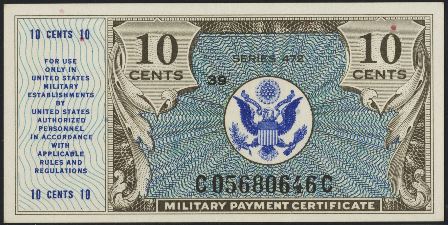 Want to Sell Your MPC Currency? We can’t help you value your military payment certificates over the phone. However, if you send us pictures of what you have then we will respond back quickly with some accurate values. We are also buyers in most cases. Sales@AntiqueMoney.com